Anticipating the IVAM’s thirtieth anniversary next year, in 2019, Patricia Gómez (Valencia, 1978) and María Jesús González (Valencia, 1978) are presenting a specific project for Gallery 6 with their eye on the museum’s history. The project focuses on the social memory encapsulated and concealed in this gallery’s walls. The artists use a procedure very close to archaeology to extract the layers of paint that have gradually been applied to the walls in order to reveal traces of the activity that has formed the IVAM’s history, year by year, in one exhibition after another.
With this activity Patricia Gómez and María Jesús González offer a reflection on the construction of the IVAM as a sum of stratigraphic units that metaphorically materialise the various contexts and agents that are part of the museum’s history and that shape the IVAM as a public space on the basis of its various political, economic, cultural and social circumstances.
Paperback
Texts in spanish and valencian
rrp:12€
Until the end of the exhibition rrp: 11€ 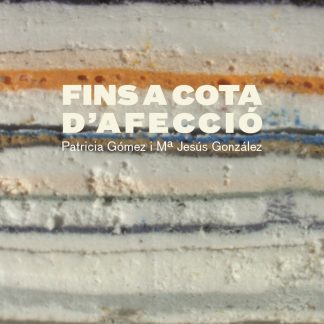 You're viewing: Fins a Cota d’Afecció Out of stock
Read more