The end of the Spanish Civil War and of the Second World War suggest opposing worlds, radically different settings, but both have been built on wasteland; on pain, on ruins and on material and ethical debris which causes the absolute destruction of the war. And all of this takes place in complex living conditions: in exile, in migration, in repression.

The two post-war eras meant a radical censorship for the history of culture. In Spain under the dictatorship, the aesthetic project envisioned by the Falange would try to reduce culture to state propaganda, to break with the experimentalism of the vanguard and return to a certain academicism articulated from the ideal of what is national and Catholic. In the 1950s, the Regime’s need for international legitimacy would seek to continue to exploit culture, but with an approach to more contemporary language. Indeed, without losing the essence of all that is “Spanish and Catholic”. Throughout the rest of the world, defeated by the war and its horror, the breakdown of the previous vanguards would come from the disturbing question about the relationship between civilization and brutality. In both cases, totalitarianism, violence or cultural misery forced numerous artists to migrate, go into exile and work far away. But their journey uniquely enriched the territories that welcomed them. 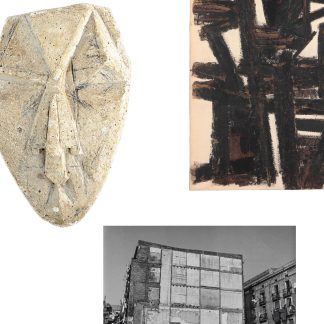